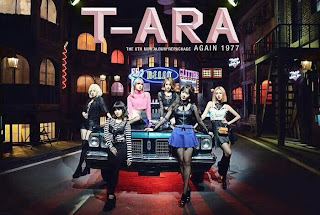 Those who have been wanting to purchase T-ara's upcoming repackaged mini-album can now do so.
Check out the preorder links T-ara's 8th mini-album 'Again 1977' below.


T-ara's 'Number Nine' X-Mas Edition
is now up for preorder too.
♦ Check out T-ara's teaser pictures here
Posted by nearnine on November 29, 2013