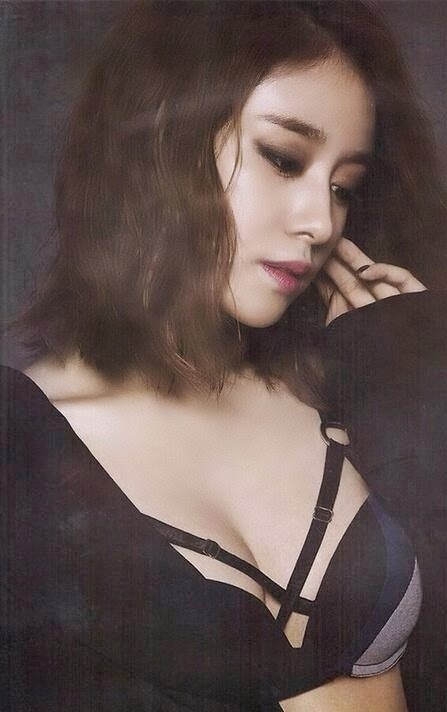 
Reporter: I took a look at some of your posters before this photo-shoot. Most of them show a look of a teenage-girl smiling.
Jiyeon: This is my first time showing some skin in a photo-shoot. I like this concept of dreamy. It feels like something that I want to do before. I like it.

Arena Homme: A lot of girls have used the image of sexy on TV. Following this concept may just make you appear normal.
Jiyeon: Sexy can be achieved even without showing off skin. But most guys only feel that it is sexy when they see some skin. Isn’t it?

Arena Homme: Girls say that it is possible to be sexy without exposing skin. But precisely what does that mean?
Jiyeon: Yes, Kahi unnie only showed her abs in her previous solo album. She used a concept of gender-neutrality. Abs are sexy and cool. Girls feel that such looks are very cool and sexy. I am the kind who has more females fans. Should I say I’m like a guy? I think that since I have an outgoing side to me girls like it more.

Arena Homme: So Jiyeon solo album can be thought to have a concept of gender-neutrality?
Jiyeon: How should I say it.. To be like Kahi unnie is my personal opinion. But CEO says it is better to have an image that the majority of the public likes. So we are still discussing on it. We have finished recording the songs. The songs are similar to the dreamy concept today. But it has the side which is much bolder.

Arena Homme: Can you give more details?
Jiyeon: The album will be released soon. You will know then.

Arena Homme: There is a trend among girl groups where solo activities are becoming more prevalent and the majority of the solos are often the leaders in the groups. They do not totally venture off the character/image that they have in the group. But they may have better results in their activities and on this point, solo activities are not without its burden.
Jiyeon: I want to show an image that is different from T-ara but I realize that this is really difficult. Even though it may be to find my own image, the style that I want is not the same as what the company wants. We hold meetings everyday. Actually, the idea of solo activities was also a sudden one. So until now, it does not feel real. I feel very nervous and the burden is very big. However, regardless of who, anyone in a group will have have thought of having a solo. I am just very nervous and excited about this attempt. But I am not looking for solo success, I just want to show that T-ara has not fallen.

Arena Homme: The public likes artists to be real and they also understand the style and character of an artist, to a certain extent. The public are increasingly demanding for artist to be real and direct. They want to know who the artist really is.
Jiyeon: To be honest, I don’t have much opportunities to show everyone the real me. Although I have been on many stages, but the chance of participating in variety has been few. Also, the image that people have of my drama characters are strong. This time, I will try to do as much as I can.

Arena Homme: So you belong to the personality type who is slightly direct?
Jiyeon: Very direct.

Arena Homme: Then why go into acting?
Jiyeon: Becoming an actress is my dream. I have never thought of being a singer, not even in my dreams. I went into our company and received training. My skills slowly improved and I formed a project group with Davichi and after that I debuted as a singer. I was lucky to be able to be a singer and an actress at the same time.

Arena Homme: Everyone will experience hardships. Some choose to avoid while others choose to confront it directly. Which group do you belong to?
Jiyeon: Rather than let it be, I choose to resolve it. I belong to the type who will face it to solve it.

Arena Homme: It is inevitable that one experiences difficult matters when entering into the society, especially in regards to human relationships. To experience the difficulties of entering into society so early, you must have learned some lessons?
Jiyeon: I started when I was very young, hence I never managed to experience some of the things that people my age had and at the same time, I also experienced a lot of things that people my age had never experienced before. Even though it feels difficult even as of right now, it is something that has to be done. This is the path that I choose. Rather than feeling tired, I think that it was a good that I made the decision to be on this path at an early stage. I have never regretted choosing to be in this field and I will never regret it. I saw my secondary school friends not long ago and it felt strange. They were talking about the hardships that they were facing at work. I am not able to relate to their feelings. It feels like my age has stopped at high-school and growing up does not feel real. Meeting my friends, I feel that they are no longer young anymore.

Arena Homme: It must be very lonely at that time.
Jiyeon: I think a lot then and it was very easy to become a blur. I didn’t know what to do when I was lonely. I stayed at home. What should I do? I didn’t know how to resolve it.

Arena Homme: I don’t know as well. Maybe drink lots of coffee and smoke a lot.
Jiyeon: That can’t be done. It harms the body. But I really don’t know what to do.

Arena Homme: One will grow up after meeting difficulties. People change after meeting such events. How has you changed?
Jiyeon: I became matured. After the incident, I started reflecting. I started to rethink on things that I used to think were right. I changed a lot. I understood after the suffering and felt regretful.

Arena Homme: Since you are an adult now, let’s talk about being an adult. Are you in love?
Jiyeon: I want to socialize with guys but there isn’t much guys that I can socialize with in my surroundings. And now is also not the time to. There is too much responsibility and burden, so I don’t have the mood to think of these issues. I will think about this after my solo activities have ended.

Arena Homme: But you can’t be single forever.
Jiyeon: Of course I have been in love. But why is it that there are so few guys in my circle?

Arena Homme: What type of guys do you look for?
Jiyeon: Friendly and kind person. Just being kind is enough.

Arena Homme: A cold person. That is one of the views that have been related to you. I thought of the reasons for that, is it because you are not familiar when in variety shows?
Jiyeon: It is totally strange for me in variety shows. I don’t talk much so people often misunderstand. Now it won’t be. Please look forward to it.

Arena Homme: I got a shock during the photo-shoot. So much ageyo. I was feeling embarrassed when you were mimicking a child speaking. But I was very happy seeing that.
Jiyeon: I am familiar with our working staff and unnies, so I wasn’t worried. Don’t judge me of being cold because I actually have lots of ageyo. Because I am a maknae. Everyone will be so surprised when they see the real me. Haha.

Arena Homme: If you let everyone see this side of you during your solo, they will really like it.
Jiyeon: Yes, I want to be loved.
♦ More of Jiyeon's photo from Arena Homme here
Credits:
Arena Homme Magazine
Manutdbeckham,OneHallyu
Posted by nearnine on April 22, 2014