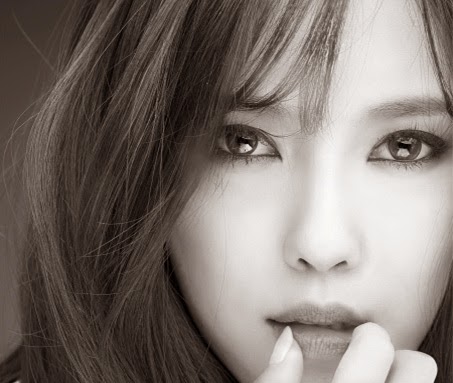 Featured in the May issue of 'Celebrity' magazine is no other than the beautiful, sexy and gorgeous Hyomin of T-ara!
Photo Update: 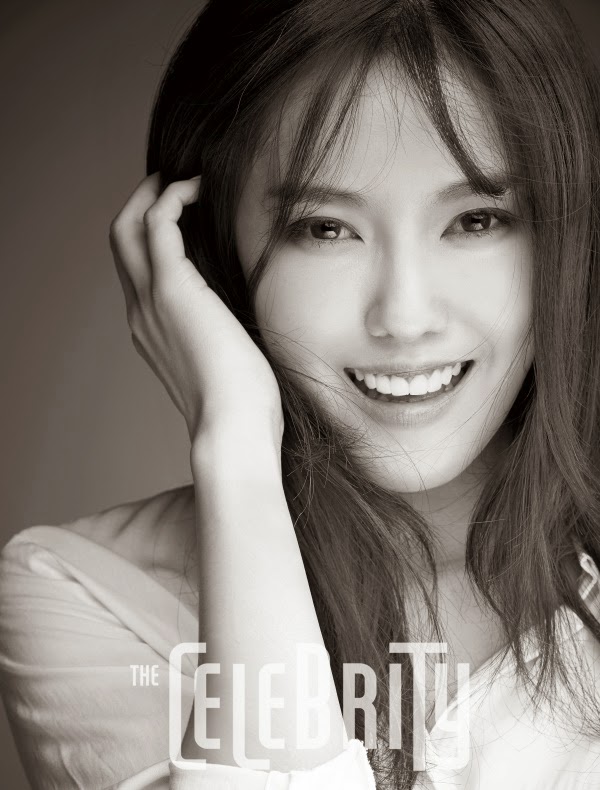 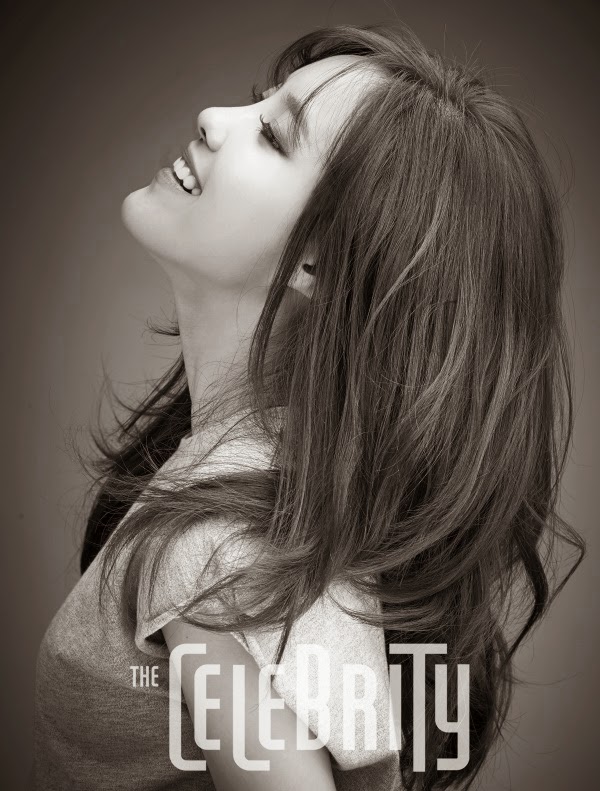 Get to know more about her as she reveals her thoughts and ambitions through this interview.
-♦-
It hurts, so it is youth.


The camera is only natural to Hyomin. After T-ara’s debut in 2009, a camera that captures her every move has always been around her. At the same time as an actress, to Hyomin the camera is a paintbrush that paints another self to her. She was the subject to all of those enormous cameras. In order to capture Hyomin’s face, the camera got so close that her face almost bumped into photographer Cho Seihon‘s face. What she was asked of was no other than a delicate sentiment. Like when a movie director goes for an extreme close up in order to fill the whole screen with extreme sentiments. Even up so close, through a flush of rage from her girly and lively face, she pulled out the emotions of holding in bitter tears in front of the camera that backed away like a slightly sullen lover. The thought occurred that it’s Hyomin who can make all kinds of facial expressions from the bright expression of the vampire girl in Director Tomas Alfredso’s “Let The Right One In”, Lina Leandersson, when she said “Can I come back?” to her angry expression from when she got rejected. Just like that, Hyomin was a woman with various facial expressions.

Celebrity Magazine: You already entered Sungkyunkwan University Department of Performance Arts before you debuted as a singer. So it seems that you already had a dream of becoming an entertainer before a singer.
Hyomin: Actually, my dream was a theater and musical actress. And so, I participated in the drama club activities when I was a high school student and even learned acting in an acting academy and a small theater company before the entrance exam.
It seems that you were a girl who had charms to her acting.
Hyomin: When I was young I was an extremely passive person. Since I was a kid, we had so many art supplies at our home given that my parents majored in arts. As I was thinking whether I, too, should do arts, I saw the Anyang Art High School uniforms by coincidence. I think I thought that I got to wear those pretty uniforms. That was probably during my second year of middle school.
CM: You weren’t originally from Anyang Art High School, were you?
Hyomin: That’s right. As soon as I applied there my (grades) dropped. So I got so spiteful. To the point that I bought books about acting. Back then, I probably felt that I should go to a university that’s better than the ones my High School friends are going to. I did better than normal at the SAT, so I was able to attend to the university I’m attending now.
CM: You gained recognition as you first debuted in a girl group, then you finally started your acting career, that was your dream, with the horror movie “Ghastly”. The moment you were confirmed in the casting is a moment you cannot forget in your lifetime.
Hyomin: Actually, because this opportunity has been my dream since I was a student. I was so happy at the thought that I was slowly approaching my goal. My parents too were so happy, they prepared lots of delicious food that day.
CM: However, the reaction to your movie debut was considerably cold.
Hyomin: Each of Eunjung unnie and Jiyeon filmed a horror movie at the same time. Both of their movies went well. However for “Ghastly”, the judgements on it being ‘Rated 19’ overlapped and it did poor. But on my stance, this work was just my first step. of course, it would’ve been great if it started off well but it couldn’t. However, rather than being disappointed, I was more excited about finally having acted in a movie.
CM: After that you were casted as the lead in Japanese movie “Jinx!!!”, it even had a Korean premiere. But it indeed did poor on box-office.
Hyomin: Truthfully, the fact that this work was premiered in Korea, alone, made me satisfied.
CM: What kind of role do you definitely want to try in the future?
Hyomin: The role that I really want to try is a character that you can never predict. Seeing the girl Moon Sori sunbae-nim played in Director Lee Changdong’s “Oasis”, I thought that I really want to do such a character with lots of stories behind it. I’m not still that young. But I want to have as much experiences as possible. I also want to try a play and a musical.
CM: Although your singing career is also important, it seems that artist Hyomin has more interests in acting. In this area, do you have any sunbae that you set as your role model?
Hyomin: Thinking of an actress who’s really good at acting, there is one that I would definitely watch any new work of hers. It’s Jeon Doyeon Sunbae-nim. I think that the aura that she gives off, by itself, is very cool. Also, Kim Minhee unnie is one of the actresses that I want to be like.
CM: Today, the camera got too close that it almost touched your nose. It was a little bit awkward.
Hyomin: This is the first time I get this much close to the still camera. I inwardly thought that it would be similar. But since it’s the same camera anyway. Also, because the feelings I was portraying are similar as well. I have a close relationship with writer Cho Seihon. So I think I was able to be in touch with my emotions without any burden.
CM: What kind of relationship is it?
Hyomin: He’s, in fact, my photography teacher. We got to know each other through T-ara’s album jacket shooting. After that, I started to help him like an assistant at photo-shooting of other artists in the same company, and slowly learned photography from him.

CM: Is photography a hobby of yours?
Hyomin: I still can’t call it a regular job. As I am intending to learn it again, I don’t have the time to do so.
CM: Do you have lots of cameras?
Hyomin: A lot. I also like collecting them. I have from toy cameras to DSLR Nikon to D800 to even vintage ones from about the 20s. I even have the lens that teacher Cho needs. Actually, although I like playing with camera angles, I like taking pictures of other people so much on the contrary.
CM: Have you also tried film cameras? We are curious if you felt of their difference from digital photos.
Hyomin: Of course. I have various film cameras that I use including toy cameras. The happy thing about the work that you shoot with the film is probably the ‘anticipation’ and ‘curiosity’. I really like the period of anticipation spent wondering what was it that I filmed, and how did I film that.
CM: As we are shooting today, your face by itself is so beautiful.
Hyomin: Rather than beauty, it seems to be the great variety of faces due to the change of the angel and facial expression. Looking at my photos, there are times when I get surprised at my facial expressions. There are also times when I look strange. haha. So I think it’s just the charm of the photographs themselves.
CM: On the coming May, you’re debuting as solo singer Hyomin not T-ara Hyomin. This is a very great deal to an artist. (Note: This could also change, as Jiyeon's solo release was moved because of the Ferry Tragedy)
Hyomin: I am not feeling this yet. I think I have to go up on stage for the first time first so that I will be able to feel it. Although it’s my first work under my name, I’m not feeling greedy about this. If I say this it will be considered a lie. Rather than wishing to do better than T-ara, I want to show people that “that kid is a T-ara member but she can show such stage by herself” and “so that friend is a friend who had lots of charms”.
CM: T-ara is a girl group who climbed to the top on the same time they debuted. However, nowadays, even when you release new music you still are not being able to get back to old days’ glory. It must be so upsetting.
Hyomin: All of the members feel the same. Because we can’t blame the the outcome that has already been on anyone. It’s our fault. By this we are admitting to our mistake. Just as much, we are going to oblige ourselves to try even harder. Honestly, we did get upset. Because we worry what to do if our efforts all go down the drain.
CM: Being called an idol, acting-dol, concept-dol, etc. This is definitely because you’re an idol group member. You might have perhaps wanted to gradually get rid of this idol title.
Hyomin: Before being called as such, I had a choice I’ve decided myself. That would be a girl group named T-ara. So I didn’t necessarily feel the need to get rid of that. Although I do hope to be called an actress rather than an acting-dol, right now T-ara is far more important to me. Right now is a very important point of time for us as group members.
CM: We are curious of whether your music is all your choice.
Hyomin: The only genre that we haven’t yet tried is obvious. It’s our own preference of music that is very different than T-ara music. Jiyeon is debuting as a solo on 30th of April first, it’ll be quite refreshing to listen to her and my music.
CM: You are clearly taking the route of a singer, but as time passes it feels as if you’re focusing more on acting.
Hyomin: I have so much interests in acting so that could happen. That’s why I try not to choose the short way. While standing on stage is a very valuable experience for me, doing movies is also an experience I can not throw away even when my movies did poor on box-office. I want to try my best and properly show everyone when I mature. Of course, there are also still lots of things I want to do as a T-ara member.