T-ara sat down for an interview with 'Sanspo' 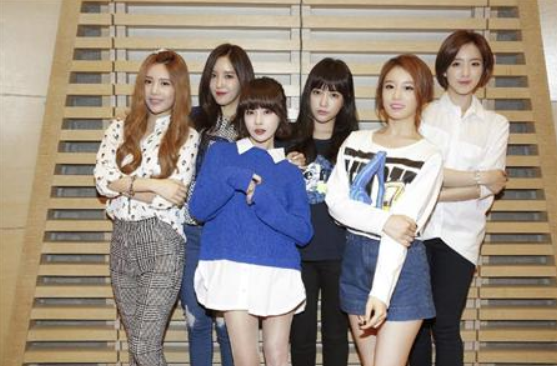 In relation for their promotions for their 3rd Japanese album, the girls of T-ara have sat down for an interview with Sanspo.
Have a good read below, and learn more about 'Gossip Girls', and the members of T-ara as well.

Q: T-ara will release the long awaited third album Gossip Girls on May 14th, after about 2 years and 8 months since the debut in Japan.
Qri: It is almost 3 years since our debut in Japan, frankly speaking I couldn’t believe in it at first. At the same time I’m so glad and I really want to meet the Japanese fans
Soyeon: This time Gossip Girls will be different from the two previous albums. Apart from the songs from the singles (Lead the way, La’BooN, Number Nine, etc.), it will contain many new original Japanese songs. It will also contain Japanese version of “Do You Know Me?” which is the latest Korean hit song. We portrayed melodies of house, Latin and American pop in the songs. You will see different side of T-ara!

Q: The title Gossip Girls is a bit surprising, what is the album’s concept about?
Eunjung: (laughs) This is the image of American celebrities. We did the photoshoot for the CD jacket in an atmosphere of being constant objectives for paparazzi and then we take off our uniform jackets and having a party in a limousine. For the first time the story defined the concept of the photoshoot, so look forward to it.
Hyomin: The uniform was inspired by the US TV-series Gossip Girls and it was a bit fancy to wear. Yet still remembering student days and looking younger and happy because of the uniform brings up a fresh mood

Q: How was the recording?
Jiyeon: As Soyeon unnie has said earlier, this time we introduced new genres into the songs of the album, and the new tempo was a bit difficult (laughs). We’ve been recording one song a day over a period of one week.

Q: T-ara took a challenge for a trip to Hawaii On Fuji TV’s Sakigake! Music Ranking Eight which was recorded for the Limited Edition ver.A album
Boram: The members were competing with each other in different games for a trip to Hawaii! Because we wanted to go to Hawaii we tried very hard to win and it was fun!

Q: Who got the trip to Hawaii in the end?
Boram: (laughs) Please look forward for the DVD

Q: Well then, recommend us songs and tell us about your favorite songs from the album!
Boram: I’d recommend the main song Just Now. This song has an American pop theme and it is very bright and positive
Qri: I like the song from the single called Lead the way. I really liked it during the recording. I’ve listened to it about 100 times. And I often listen to it nowadays
Hyomin: I like Lead the way too. Until now, dances of most of our songs had a briskly feel but this song is a medium tempo ballad and it was a new challenge for us
Jiyeon: (In Japanese) I’d recommend Keep On Walking. (In Korean) When you’re in a bad mood and you listen to it, it will cheer you up

Q: There is a nostalgic J-pop feel in it, in a way?
Hyomin: I’ve been listening to J-pop for a long time and when I’ve heard Lead the way for the first time, I’ve thought that with such an atmosphere this should be a good song

Q: Memories～You gave me guidance～ is the image song for the Japanese movie Jinx!!! where Hyomin played the leading role. This song has also been recorded and included on the album?
Hyomin: (sings a few lines) Jinx!!! is the movie with me as the lead, and the excitement only doubled with having our song as a theme song (laughs)

Q: Speaking of Japanese movies, Eunjung also appeared in Dodge GO! GO! as a child actress?
Eunjung: (everyone is surprised and a big fuss is going on) That’s embarrassing! I did not used make-up during the times of junior high school at all! Five Japanese and five Koreans successfully passed the audition and we’ve been practicing dodge-ball with the representative players during the movie shooting. Ah, yet still, I’m very embarrassed!!

Q: Double A side LA’BooN has also been included?
Eunjung: This is my favorite song. I think this song fits perfectly for the spring drive. The song has Arabian nights motive.
Soyeon: I’d recommend “Do You Know Me? (Japanese ver.). This is remake of the song by a famous Korean band Sandpebbles, recorded in 1977. T-ara’sversion of this song is completely new. The song is included in the Japanese album, I think the Japanese fans will like this song; we rerecorded it in the Japanese language anew.

Q: In Korea, everyone played a role of a different character on stage as in musical for this song?
Soyeon: At first Jiyeon’s and Hyomin’s characters were not set, but during the practice we defined the characters which fitted for each particular member, like during the times of Roly-Poly.

Q: The message in the Japanese songs can be heard clearly, did you practice a lot?
Jiyeon: (laughs) Really? We’ve practiced a lot

Q: Since the title of the album is Gossip Girls, tell us a bit of gossip?
Eunjung: When to go to buy coffee and drinks, I unwillingly get food as well (laughs)
Soyeon: Lately, we were invited to attend a famous fashion show in Korea, the members and I went there being sponsored with very expensive clothes. However, we had to return the clothes at the end of the show and it was a bit sad to return there in our everyday clothes
Hyomin: My little gossip is that I have two dogs and I buy a lot of clothes for them to wear, but I rarely bath them (laughs)
Qri: I really like shoes and I wear expensive shoes, but at the same time I wear very cheap socks for about 500 won (everyone bursts into laughter)
Boram: I spend a lot on cosmetics, when we are in Japan I buy a lot of cosmetics, I usually buy three bags.
Jiyeon: I’m not such a type who cares a lot about clothes, I can wear what my mom buys me, without saying anything. I like nail art, I’d go to a shop when I wear expensive clothes.

Q: Any message for the Japanese fans in conclusion?
Qri: We are very happy that we were able to meet the fans during the promotion of the third album Gossip Girls.. The album will contain a lot of new original Japanese songs, so please listen to it and enjoy
T-ara are named after a crown (tiara) for a reason – the Queens of the music industry debuted in Korea in July 2009. After the release of their song Bo Peep Bo Peep, they were heading to the top and with good performances in variety shows and various activities, they continued on to debut in Japan on September 28th, 2011 with Bo Peep Bo Peep. They accomplished a feat straight away by becoming the first foreign artist in history to win the 1st place on the Oricon weekly chart with their debut single.