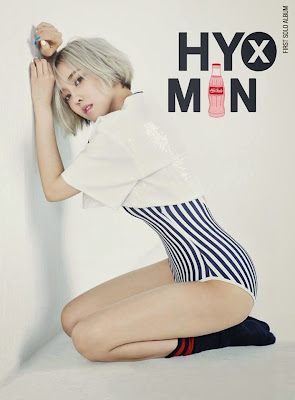 T-ara's Hyomin who has just released her 1st mini-album today has sat down for an interview with Naver Music!
Get to know more about Hyomin as she share her thoughts about her solo debut, her preparations, and more.

Q. Hyomin-ssi who came back as a solo, please share your thoughts on this comeback first.
Hyomin: As it's my first solo album, I tried my best to show everything I have. Just as much as I tried, I got to do my best on stage!
Q. T-ara Hyomin, Solo Hyomin! Is there a difference to the two sides?
Hyomin:When promoting in T-ara I am in charge of short rap and rap parts that somewhat sound powerful, so I think I wasn't able to show the bright and lively side to me. But this time I think that I might be able to show a brighter and full-of-energy side to me through my solo activities!
Q.The song's title is 'Nice Body', but wasn't that a burden~? What kind of efforts have you made~?
Hyomin:It was really a huge burden since the title was 'Nice Body'. Once I received the song, I worried about how should I take care of my body, but this time I tried out cross-fit and lemon detox for the first time! Since I was exercising and dieting at the same time I got lots of stress..but it feels like I definitely got healthier through this time's solo activities! This song has lots of lines in the lyrics that make you want to go on a diet so it was a big motivation for me when exercising. I highly recommend that you try doing healthcare while you listen to my song!

Q.You have a self-composed song in your album. Please explain for us what kind of song it it.
Hyomin:It's my first self-composed song..! Its title is'담(談,膽)'[Overcome]. This song has a retro sound to it. The intro's guitar line that's between fx-strings is the song's point.
Q.Is there a hidden meaning in your self-composed song~?
Hyomin:The title '담(談,膽)' [Overcome] has two meaning! one is 'story', and the other one is between 'a brave and strong spirit' and 'an enterprising spirit'.
I also tried to put in the message of having the courage to overcome very hard situations. I wish it can be a song that makes my fans, and lots of other people, be able to endure pain when they listen to it!
Q.Where did you get inspired from when you were composing the song~?
Hyomin:Rather than getting inspired from somewhere.. I think I just briefly wrote in my sincere feelings, and then I thought that I should make that into a song..!

Q.We're curious of what do you want 'Solo Hyomin' to be remembered as.
Hyomin:I don't hope for much. If anything, I just wish that it makes people who watch my stages and listen to my song think like “This kid has charms” and “It's fresh”..This is also the goal of my solo activities!
Q.At the end, please tell us your solo activities' plan.
Hyomin: I will prepare hard and do my best on stage until the day these half-thrilling, half-tense activities become filled with only thrill. Please show lots of support for 'Nice Body'~ Thank you. Ah! Also, please show lots of anticipation for T-ara's album that will come out after my solo activities..!
♦ See more BTS pictures and Making Film here