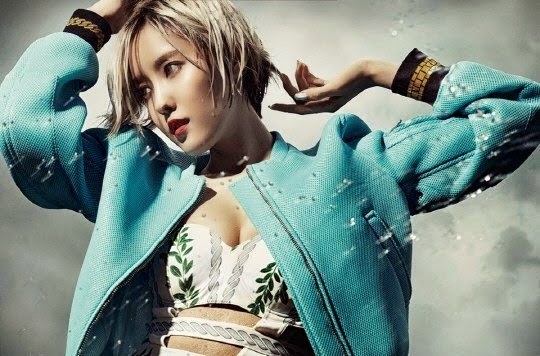 After falling for Hyomin's photos from 'Arena Homme+' magazine a few weeks ago, she's back to make us fall all over again through her interview!
Have a good read and check out Hyomin's interview below.
Hyomin's Summer 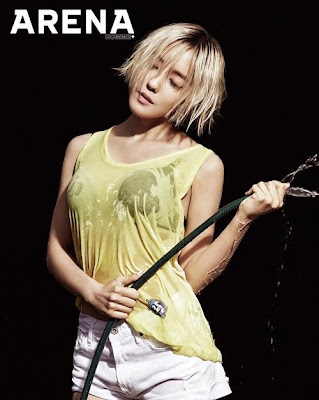 Hyomin wants to change. In order to change, she cut her hair short and dyed it yellow. She will stand solo on the stage, not with T-ara, and sing a song that emphasizes on her body. To her, this might be an unfamiliar summer.
image
Why won't she show that she doesn't like this? We thought about this while splashing water over Hyomin's body with a hose. It was mid-June but there was no sun. Wind was blowing, and It looked like it'd rain soon. We did the photo-shoot on the rooftop. We sprayed the cold water from the hose at her, who was shivering with cold. It was extremely cold. Because even I, who was splashing the water, was shivering. If you look at famous women or women famous for being pretty, you'd imagine their annoyed expression. Because then, they'd look less pretty. It will become less difficult, and you wont be nervous. Hyomin was positive. She was cute with her enthusiasm. She was happy and dancing when told we'll buy her an ice americano. She smiled so easily. She didn't look 26 years old but rather looked like a 16y/o girl. She said she wants to change. Like when a girl wears make up hoping to become a woman.
You changed a lot. Your hair got shorter and became yellow.
Hyomin: It's not that I'm brokenhearted. You never know when will you have the chance to go solo. When I was given the chance, I definitely wanted to try it out. Since debut, I only ever stuck to a long wavy hair. I never tried out something wild. I wanted to make a change to my style so I started with cutting my hair, but I still haven't gotten adapted to it yet.
It looks prettier than your long hair.
Hyomin: I actually wanted to throw away my pretty looks.
Did you want to get uglier?
Hyomin: It's not like that. As I am in a girl group, I try to look pretty out of habit. I feel that I should smile more and look cute. I wanted to get rid of that habit. I felt the change in myself after I cut my hair so I have no regrets.
More specifically, how do you want to change?
Hyomin: I was shrinking. The more I do activities, the smaller I get. My personality was originally extroverted but I was shrinking and changing into an introvert. Even my passion seemed to shrink. I wanted to overcome this circumstance and regain my confidence. So I came up with something bold. I will not be scared.
If you do girl group activities for so long, you'd fall into mannerism.
Hyomin: I'm stuck in the idol/girl group stereotype. There's no fixed answer to what kind of a person an idol is. Yet, there's a limit to how much you have to be. I think I go up on stage only caring about what people see. I want to express myself the way I am on stage and on normal days, but I can't. I have to be what I'm stereotyped to be, do what I'm told to do. That was tiring.
What was the thing that made you shrink?
Hyomin: I can't blame that on one thing. I felt a pressure whenever I didn't reach people's expectations and whenever I did something that made me disappointed in myself. It's the stress I give myself. When I debuted I worked harder and was more resolute. Now, I worry and cower whenever I go up on stage. Whenever I film entertainment programs, my colleagues would ask me why am I discouraged. I want to overcome this slump through this time's solo activities.
Our expectations have gotten higher for your solo activities. What kind of difference does your solo album have compared to what's already there?
Hyomin: I wanted to show my healthy and bright energy. That's why I used some hip-hop sounds. I certainly wanted to deliver a stage like ‘Ten Minutes' from the past. I worked together with Brave Brothers, and made it into a song that fits well with the bright feeling. The title is ‘Nice Body'. It expresses a woman's honest feelings, you'd know when you listen to the lyrics. It's very straightforward.
How much straightforward is it?
Hyomin: It says that a woman dreams of revealing skin at least once, and also says ‘have confidence', like casting a spell on yourself. Also, there's a line saying ‘Nice Body' in the chorus. That's a little stressful. Since I have to show my body and sing “Nice Nice Body”.
That's worrying over nothing. (Your body) is nice enough.
Hyomin: Worrying that people might only look at my body, I exercised. I worried because it sounds very provocative if you were to listen to the title alone…but it's a relief that it's a bright song. It has a fun melody and a sexy code too. There's also a dance emphasizing on my size where I use a tape measure. There's a secret to the outfits, as well. It has numbers written on it.
Does it have '75B' written on it?
Hyomin: Haha. No, it's 34-24-36, there's a very little falseness to this. If I breathe deeply It'd certainly become 34. I wanted to express the ideal body in women's eyes so I made the outfits this way. I want to quickly go up on stage.
*This interview was done prior to the the release of Hyomin's song 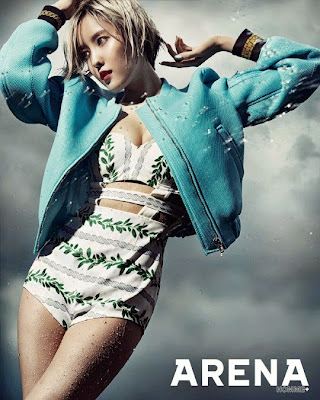 You're 26 years old. What kind of persona does a 26 year old Hyomin has, not as a singer but as Hyomin?
Hyomin: Not different than others. I still meet often with the friends I became closer with during school days. Our talks, too, are similar (to old days'). Likewise, we talk about marriage. I want to marry when I'm older but my friends want to marry before they turn 30.
Marrying before 30s is not an easy dream.
Hyomin: I'm now going through my late 20s. Also, I'm an only child. I want to act a bit more like the baby at home, but I think I have to quickly accomplish something.
When women talk about men what do they talk about? What kind of a man's aspect do you talk about?
Hyomin: We just talk about dating. Talk about how we all should date. My friends told me to do well on this time's activities and then receive lots of calls from men. Haha. Hearing such, I really think that I should work hard.
On average, busy working people would date people from the same working field. For idols, it'd be comfortable to date a fellow idol, right?
Hyomin: The chances of us(idols) dating are high since we see each other a lot. Conversations with a person from the same work field would flow well, our time slots would match, and we'll be able to understand each other in many aspects. However, it's not easy. All are handsome men and beautiful women, we have to choose a good timing if we're to date. Also, falling in love with each other is tiring. But people always take care of it and date.
From mid to late 20s is a very anxious time. Your future is vague and it feels like you have to accomplish something before you turn 30.
Hyomin: It's exactly like that. That's why I sometimes think that I should put my life on the line for this time's solo activities. I also purposely increased my practice time.
Do you have a fixed goal?
Hyomin: Due to the nature of my work, my goal is vague. In a normal company, an assistant manager gets promoted to a manager, there's a systematic structure to become a manager but there's nothing like that in the entertainment industry. I only think of how to do well in what I have in hands. I only think about this stage (ahead of me).
Do you look a lot for articles about you on the internet?
Hyomin: Of course. Everyone searches their name the most. I know of all the rumors about me that other people do not know about.
But that will give you lots of stress.
Hyomin: I don't read articles as much as I used to. In my early debut days I used to look at the comments and look for things I can fix (about myself). Now I look for good things about me a lot. Sometimes there are articles that give me strength or some good evaluations. I gain strength from such articles.
When you face critisims, you might feel like you want to run away. You can become a forgotten celebrity and then find another job. You can then live the life of an employee with a steady job.
Hyomin: Whatever job it is, it'll be just equally as tiring. At first, I worried that “Will we be able to become known?”, how am I able to let the name ‘Hyomin' become known. At that time, it was hard because we were unknown. Now, it's hard because we became known. I can't tell which one's harder. If we were to give up, we would've given up since the start. Our attachment to this job was strong, if we can't even go through this then will we be able to do another job? Office life can be even harder than this. Every job has its own difficulties. I want to quickly sing this song (‘Nice Body'). I'll just work hard.
After promoting with a group, you're now all by yourself. Having a solo album has its advantages, but you might feel lonely on site. Since the people around you have suddenly disappeared.
Hyomin: It's lonely. When Jiyeon was recording for broadcasts I visited her about 3(?) times. Jiyeon was very happy. She'd tell me to go eat together and to stay a little bit longer. I think I'll become like that too. It was always noisy inside the car and in the waiting room but now it's all quiet. It'll definitely feel lonely to come to think of that. The members would come visit me, right? 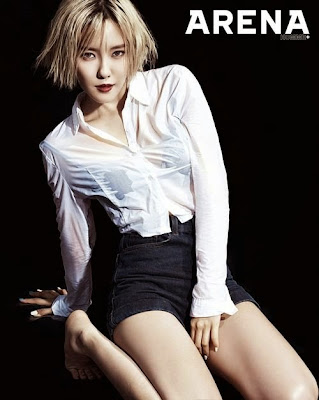