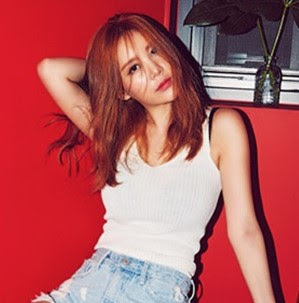 T-ara's Qri continues to delight fans with her goodies from BNT.
After her BTS video, and pictures, here comes her interesting interview. 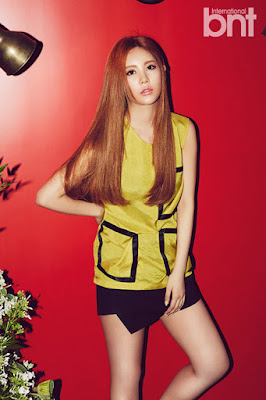 T-ARA who are back as a group after 1 year are set to make the music industry ‘hot’ this summer with their title track ‘So Crazy’.

Before, T-ARA have showed us hit songs that make you dance excitedly just by hearing their melody, like ‘Bo Peep Bo Peep’, ‘Roly Poly’, ‘Lovey Dovey’, etc. This time, they are set to blow the summer heat wave away with the very T-ara-like ‘Freeze’ dance in their song ‘So Crazy’.

On a summer day in August, just before their comeback, we met with Qri, who’s in charge of ‘Cutie Pretty’ in T-ARA, and asked her about her activities throughout all that time, about this time’s album, and about various things that the public have been curious about.

• What kind of song is your title track, ‘So Crazy?

Its exciting and addictive melody that Brave Brothers composed is its unique feature. It’s a pop song with an easy melody that you can’t get sick of. We are going to showcase fun performances as well on stage.

• Most of T-ARA’s songs have a special point in their choreography, what about this song?
We have a ‘Freeze’ dance in this time’s choreography, it’s an easy and cute move that anyone can follow

• It’s your group comeback after a year. We are curious of how the preparations went and about your activities during that time.
After our Korean acitivties ended, we had many activities in China. We are having an on-going China tour right now. We were mostly preparing for our concerts up till now. The members are each working hard to maintain their health as well. 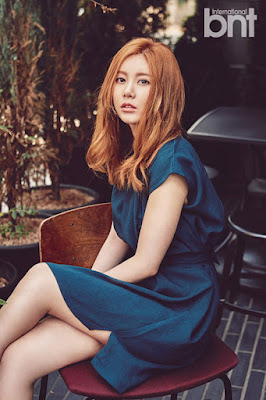 • Is there specifically a member who pays more attention in maintaining her body?
Boram is the representative of a successful diet. She used to weight a lot before debut but she lost around 10kg. I can see the big effect of self-massage in Boram.

• We are curious of girl groups’ special body-maintaining strategies
I share a room with Hyomin during overseas schedules, we always wear pressure stockings before sleeping to reduce the swelling of our legs. We also sleep while placing our legs on bolsters, it helps on creating pretty legs. All of the T-ARA members are good eaters so we can’t give up on eating. In Eunjung’s case, she’s lately been controlling her diet with salads.

• Girl groups’ activities are very remarkable this summer, are you not worried?
We came out with an exciting song that has a summer feeling to it, but there are many groups with the same concept. From existing girl groups to rookie girl groups. It’s not that I’m not worried at all. This time, Wonder Girls seniors had their comeback, it was really cool. All of our members were stunned watching their teaser.

• In the meantime, many things happened within your group. If you have to put efforts into one aspect in order to improve T-ARA’s image, what aspect would it be?
Amongst the many things being said about us, there are many false and unfair portions. There are many things that we want to explain one by one, but we don’t have a way to do so. We already released a formal statement before denying the false accusations, but people do not believe us. As public figures, I guess we have to put up with this. I think there is no way other than paying for it through working hard. Regarding the things that became huge issues for us as public figures, we, the members, talked a lot about them amongst ourselves and reflected deeply.

So much time has passed than I thought. In the past, the members and I used to get upset and tired hearing unpleasant talks. However, all of the members are fortunately trying to think positively now. We’re trying to give seconds thoughts about everything and act cautiously. I think even malicious comments are considered a type of interest in some way. We will work hard in order for the good comments to slowly increase. 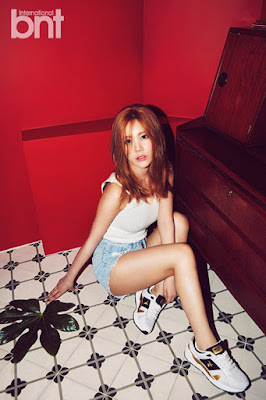 • 6 years old T-ARA. You’ve spent so much time together with the members just like a family, please reveal their strengths and weakness.
Boram is mature in her thoughts. Living together, there are many times in which I feel ‘Ah she’s definitely the oldest between us’. Soyeon has such big-mindedness where she would personally come up and speak of the things that the unnies couldn’t speak of so easily. She’s also an eloquent speaker. Eunjung has a friendly personality. She is very social and easily approaches people. I personally envy such personality.

Hyomin is humorous. Being her roommate, I get to listen a lot to her personal stories, her personal life, by itself, is fun. Let work aside, she’s the member I personally get along with the most. Magnae Jiyeon has matured quite a lot compared to her teenage years. She’s the type to think of and take care of the people around her. She’s also faster in learning compared to the other members.

• Maknae Jiyeon has recently started dating. How were the members’ reactions?
Due to her continuous movie filming, we didn’t get any chance to meet her. After hearing about her dating, we really got very envious. Especially Boram and I (laughs). Besides Soyeon and Jiyeon, all of us are extremely lonely. The fact that we’re not dating regardless of our company not having any dating restrictions is sad (laughs).

• Qri who’s in charge of ‘Cutie Pretty’, is there anything that you have gained from being in T-ARA?
There is a perception that I should act cute and pretty just like the name given to me by our fans. I am trying to act according to my name. I am 30 years old this year, so I can’t show such side to me outside. I am solely enjoying it during TV activities.

• Your future plans and goals
I wish there are more people loving T-ARA’s song. It’s our 6th year this year, I wish we can become a loved group lasting for a long long time in the future. I especially wish that this song does well.

• At last, what is T-ARA to Qri?
(T-ARA) gave me the chance to have two kinds of lives. They’re also a valuable gift letting me forget about my age, as well as my 2nd family.
♦ More of Qri's pictures from BNT here
Credits:
FyT-ara,BNTnews
Posted by nearnine on August 07, 2015